Along convergent plate boundaries, continental volcanoes or chains of volcanic islands are found.

Along divergent plate boundaries, small volcanoes are formed in the rift zone.
At transform boundaries, volcanism is absent and only earthquakes are observed. 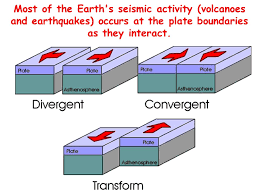 #2 Consider the following statements with reference to the Sargasso Sea 1. It is named after free-floating seaweed called Sargassum. 2. It is the only sea without a land boundary. 3. It is surrounded by four currents that form an ocean gyre. Which of the statements given above are correct??Solution (d)

There is shift in position of pressure and wind belts due to seasonal changes of position of Earth in relation to sun.

The shift along with other factors is also responsible for Monsoonal Climate.

#4 Consider the following statements with reference to Liquefied Natural Gas (LNG) in India 1. It mainly comprises of Methane. 2. Most of the LNG demand in India is met through domestic production. Which of the statements given above is/are correct??Solution (a)

LNG is natural gas (predominantly methane) that has been cooled to –260° F (–162° C), changing it from a gas into a liquid that is 1/600th of its original volume. This dramatic reduction allows it to be shipped safely and efficiently aboard specially designed LNG vessels.

India is the 4th biggest liquefied natural gas (LNG) importer in the world, sourcing nearly half of its gas requirements from overseas.

Because of friction with ground, the advance of lower portion of a cold air mass is slowed relative to upper portion, resulting in steepness of slope and a protruding “nose” as it moves forward.